A cunning and most able Jedi Knight during the early years of the Clone Wars, athletic, exotic, blue-skinned Aayla Secura proved her worth in countless galactic engagements. She often fought alongside Clone Commander Bly, and felt obligated to pass on the emotional control and self-awareness she had learned as a Jedi to others requiring guidance. Sadly, Aayla Secura was slain, along with so many Jedi warriors, when her own programmed clone troops were compelled to turn on her. 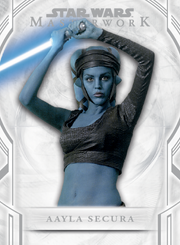 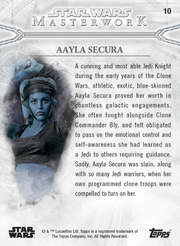 Retrieved from "https://starwarscardtrader.fandom.com/wiki/Aayla_Secura_-_Masterwork_2018_-_Base?oldid=32355"
Community content is available under CC-BY-SA unless otherwise noted.