Jedi Master Adi Gallia was part of the Order's High Council during the Clone Wars. She and the other Council members would convene in a temple high above Coruscant, deciding important matters of the Jedi. Stern and focused, she would remark upon the more outrageous tactics carried out by Anakin Skywalker or Obi-Wan Kenobi in the course of the war, but rarely condemned their effective actions. Though not as brash as Anakin, Adi Gallia was known to be an aggressive warrior, with no problem bringing the fight to the enemy. Though one of the most skilled and revered Jedi of her time, Master Gallia was struck down by Savage Opress. 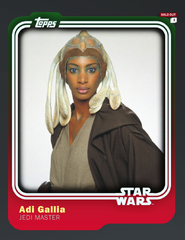 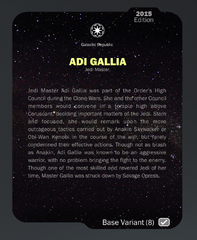 Retrieved from "https://starwarscardtrader.fandom.com/wiki/Adi_Gallia_-_Jedi_Master_-_Base_Series_1?oldid=31691"
Community content is available under CC-BY-SA unless otherwise noted.