A veteran of the Clone Wars, Ackbar is a Mon Calamari who rises to the position of foremost military commander of the Rebel Alliance. He leads the Alliance fleet against the Galactic Empire's second Death Star, under construction above the forest moon of Endor. The attack itself was all by the Emperor's design in an attempt to ferret out and crush the Rebellion. Ultimately, he sides with Lando Calrissian and the Alliance fleet perseveres against insurmountable odds to score the decisive victory that would bring an end to Palpatine's Empire. 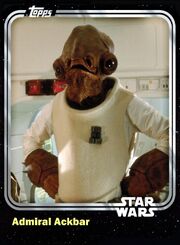 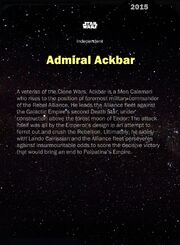 Retrieved from "https://starwarscardtrader.fandom.com/wiki/Admiral_Ackbar_-_Rebel_Leader_-_Base_Series_1?oldid=30852"
Community content is available under CC-BY-SA unless otherwise noted.