An Imperial officer who serves aboard the Death Star as head of Naval operations, Admiral Conan Motti is quite arrogant in his belief that the battle station cannot be harmed by Rebel starfighters. This leads to an open argument with Lord Darth Vader, who Force-chokes Motti in order to make an incontestable point about the elemental power of this ancient, potent religion. Motti is eventually killed aboard the Death Star when the very act he deemed impossible occurs, and the Rebels triumph. 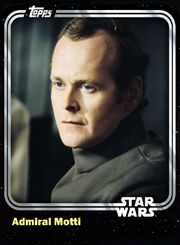 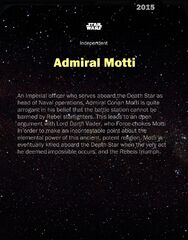 Retrieved from "https://starwarscardtrader.fandom.com/wiki/Admiral_Motti_-_Imperial_Officer_-_Base_Series_1?oldid=40674"
Community content is available under CC-BY-SA unless otherwise noted.