Born into a wealthy Caridan family, Kendal Ozzel graduates from Core World institutes as a Captain of the Line but is relegated to teaching positions because superiors doubt his ability to function as an effective field commander. Even so, he continues to serve the reorganized Galactic Empire, eventually assigned to Darth Vader's Star Destroyer, the Executor. Following a botched attempt to suprise the Rebels at Hoth, Ozzel is choked to death through the Force by an extremely displeased Lord Vader. 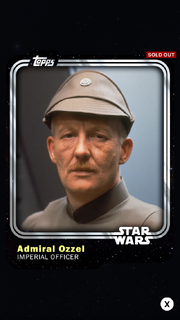 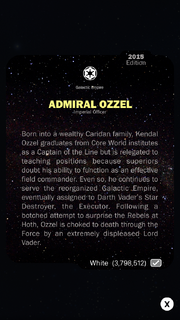 Retrieved from "https://starwarscardtrader.fandom.com/wiki/Admiral_Ozzel_-_Imperial_Officer_-_Base_Series_1?oldid=35854"
Community content is available under CC-BY-SA unless otherwise noted.