Firmus Piett is an efficient officer with an uncanny ability to shift blame, assuring his ascension in the Imperial ranks. Eventually promoted to captain of Darth Vader's Super Star Destroyer Executor, Piett relentlessly searches for the Rebels' hidden base while secretly undermining the performance of his superior, Kendal Ozzel. After Ozzel is executed for incompetence at the Battle of Hoth, an eager but wary Piett steps into the admiral's role. 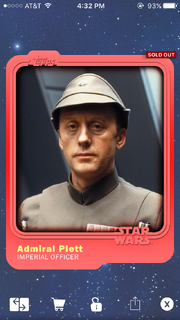 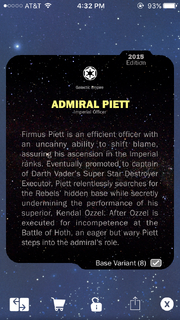 Retrieved from "https://starwarscardtrader.fandom.com/wiki/Admiral_Piett_-_Imperial_Officer_-_Base_Series_1?oldid=40371"
Community content is available under CC-BY-SA unless otherwise noted.