Under the guidance of Anakin Skywalker, Ahsoka Tano learns the ways of the Force. Much like her master, she has many great skills, but is reckless and overconfident in battle, while stubbornly focusing on single aspects of a mission rather than seeing the bigger picture. Able to hold her ground with a Lightsaber, Tano has dueled foes such as Asajj Ventress and General Grievous, both of whom are known to be deadly in single combat. She believes, above all, in doing what is right, regardless of whose orders she defies. 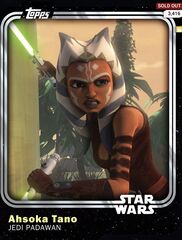 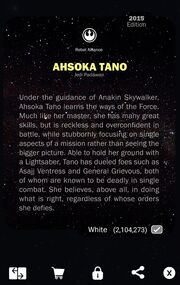 Retrieved from "https://starwarscardtrader.fandom.com/wiki/Ahsoka_Tano_-_Jedi_Padawan_-_Base_Series_1?oldid=35886"
Community content is available under CC-BY-SA unless otherwise noted.