Ahsoka Tano had come a long way since her early Padawan years with Anakin Skywalker. Using the codename "Fulcrum," Tano provided crewmates of the rebel ship Ghost with intelligence that enabled them strike back at Imperial oppression in a series of missions connected to a vaster tactical plan. The identity of Fulcrum was known only to the Ghost's Hera Syndulla, as Tano wisely reasoned that the fewer who knew about her secret assistance the better. 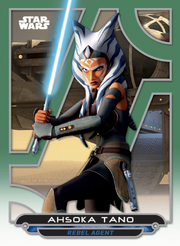 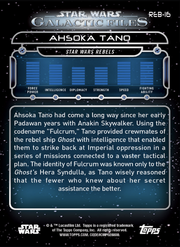 Retrieved from "https://starwarscardtrader.fandom.com/wiki/Ahsoka_Tano_-_REB-16_-_Galactic_Files_2018?oldid=32787"
Community content is available under CC-BY-SA unless otherwise noted.