During the Battle of Endor, Arvel Crynyd leads his A-wing filled "Green Group" squadron into a fleet of advancing Star Destroyers with the objective of disabling their ion cannons, thereby allowing the Alliance Fleet through to Darth Vader's Super Star Destroyer Executor. Crynyd's fighter is seriously damaged after a strafing run and sent into a spin. Making the most of an impossible situation, he pilots his craft directly into the unshielded bridge of Vader's ship sending the Executor onto a collision course with the Death Star's surface, killing himself in the process. 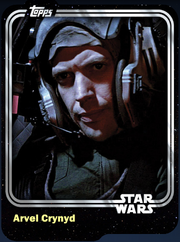 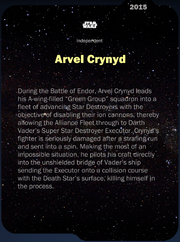 Retrieved from "https://starwarscardtrader.fandom.com/wiki/Arvel_Crynyd_-_A-Wing_Pilot_-_Base_Series_1?oldid=40381"
Community content is available under CC-BY-SA unless otherwise noted.