A feared bounty hunter known for her chalk-white skin and built-in comlink antenna, Aurra Sing was an expert sniper and trained assassin, working for anyone who pays. Sing found herself at Mos Espa on Tatooine where she bore witness to Anakin Skywalker's victory at the Boonta Eve Podrace. After the death of Jango Fett, Aurra trained Boba Fett as a bounty hunter, teaching him the skills—and the ruthlessness—that he would need in pursuing his deadly profession. She was formidable whether working alone as in her attempt to assassinate Padmé Amidala on Alderaan or working alongside the best like the notorious Cad Bane. 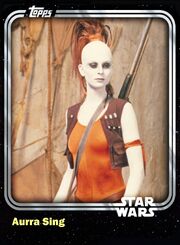 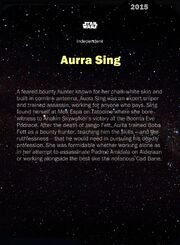 Retrieved from "https://starwarscardtrader.fandom.com/wiki/Aurra_Sing_-_Bounty_Hunter_-_Base_Series_1?oldid=32378"
Community content is available under CC-BY-SA unless otherwise noted.