Mirialan Padawan to fellow Mirialan Jedi Master Luminara Unduli during the Clone Wars. She serves valiantly in the Battle of Geonosis, fighting alongside Masters Unduli and Mace Windu. At the Second Battle of Geonosis, she teams with Anakin Skywalker's Padawan, Ahsoka Tano in infiltrating a new Separatist droid factory. Feeling that the war has caused the Jedi to lose their way, she bombs the Jedi Temple and implicates Ahsoka. Barriss's crime is revealed but the experience shatters Ahsoka's faith in herself and the Jedi Council resulting in her decision to leave the Order. 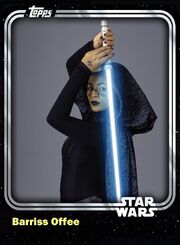 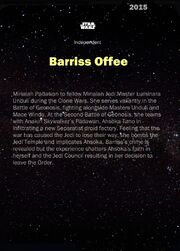 Retrieved from "https://starwarscardtrader.fandom.com/wiki/Barriss_Offee_-_Jedi_Padawan_-_Base_Series_1?oldid=32079"
Community content is available under CC-BY-SA unless otherwise noted.