The main infantry of the Trade Federation and Separatist Armies, the B1 battle droids are meant to overwhelm their enemies with their numbers. Initial models lacked combat proficiency, primarily swarming and parading into the battlefield, while failing to employ basic combat strategies such as seeking cover. During the Battle of Naboo, a young Anakin Skywalker destroys the central mainframe controlling the droids, deactivating them all. Later models are fitted with individual independent intelligence centers that allow them to operate without the need of a master signal. 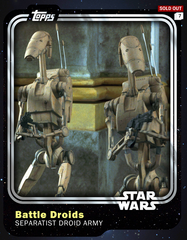 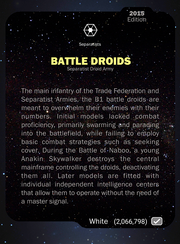 Retrieved from "https://starwarscardtrader.fandom.com/wiki/Battle_Droids_-_Separatist_Droid_Army_-_Base_Series_1?oldid=35993"
Community content is available under CC-BY-SA unless otherwise noted.