A legendary Jedi Knight, Ben Kenobi watches over young Luke Skywalker and embarks on a rescue mission that appears to end on the Death Star battle station. Kenobi faces former pupil Darth Vader and is struck down in a Lightsaber duel. But the spirit of Kenobi soon returns to advise Luke, first as a disembodied voice, then as an apparition on the ice planet Hoth, and later on swampy Dagobah, as Skywalker is trained in the ways of the Force by Jedi Master Yoda. A concerned Obi-Wan hopes that his young charge's recklessness will not endanger their ultimate aims. 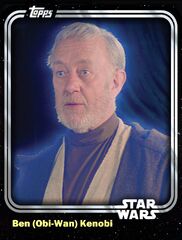 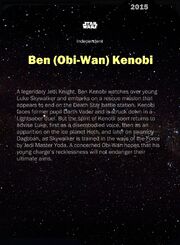 Retrieved from "https://starwarscardtrader.fandom.com/wiki/Ben_(Obi-Wan)_Kenobi_-_Jedi_Spirit_-_Base_Series_1?oldid=17511"
Community content is available under CC-BY-SA unless otherwise noted.