Biggs Darklighter makes his mark in the pages of galactic history by being one of the brave Rebel pilots who defies the odds by taking on Tarkin's Death Star, flying alongside his childhood friend from Tatooine, Luke Skywalker. Biggs is something of a big brother and mentor to Luke, so joining the Rebellion becomes their shared dream. In the Battle of Yavin, Darklighter, as Red Three, gives Darth Vader a run for his money before perishing in the cockpit of his T-65 X-wing starfighter. 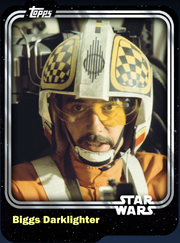 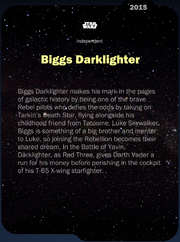 Retrieved from "https://starwarscardtrader.fandom.com/wiki/Biggs_Darklighter_-_X-Wing_Pilot_-_Base_Series_1?oldid=40383"
Community content is available under CC-BY-SA unless otherwise noted.