Rogue One: A Star Wars Story

The cruelty of the Empire affected planets across the galaxy. As a result, the Rebellion was able to recruit freedom fighters far and wide, including this warrior from Iakaru.[3] Even though restoring freedom to his planet is a key motivator, Bistan also relies in the thrill of the fight. 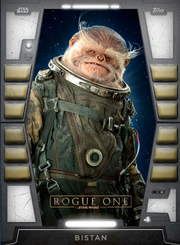 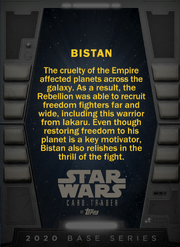 Retrieved from "https://starwarscardtrader.fandom.com/wiki/Bistan_-_2020_Base_Series_2?oldid=33220"
Community content is available under CC-BY-SA unless otherwise noted.