A human smuggler and ace pilot, BoShek like many great pilots, spent much of his downtime at the Mos Eisley Cantina on Tatooine. He was often called upon to transport spice on the Kessel Run. BoShek introduces Obi-Wan to Chewbacca, eventually leading to Han Solo's deal to transport Kenobi and Skywalker to Alderaan. 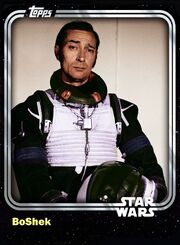 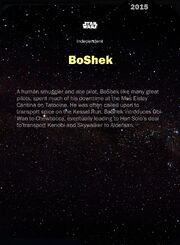 Retrieved from "https://starwarscardtrader.fandom.com/wiki/BoShek_-_Cantina_Patron_-_Base_Series_1?oldid=31112"
Community content is available under CC-BY-SA unless otherwise noted.