When Darth Vader called upon leading bounty hunters to locate and capture Han Solo, armor-clad Boba Fett was among them. Armed with a plethora of deadly weapons, Fett, like his father before him, is a fearsome, resourceful adversary. Savage and unrelenting in a fight, he is also extremely clever, waiting patiently for Solo to make his presence known after an Imperial skirmish and following the unsuspecting pilot to the Cloud City of Bespin. There, Fett collects his eventually carbon-frozen prize and transports Captain Solo into the eager clutches of Jabba the Hutt. 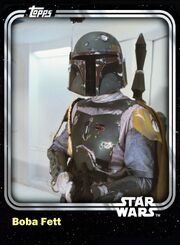 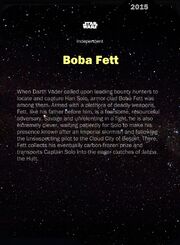 Retrieved from "https://starwarscardtrader.fandom.com/wiki/Boba_Fett_-_Bounty_Hunter_(ESB)_-_Base_Series_1?oldid=35901"
Community content is available under CC-BY-SA unless otherwise noted.