Boba Fett remained one of Jabba the Hutt's most trusted enforcers, and was a fixture in the crime lord's palace. During Luke Skywalker's daring rescue of Han Solo above the Sarlacc, Boba tried to subdue the Jedi — first with a grappling rope, then with blaster bolts. Before he could hit his target, however, Han accidentally slammed a pole into the bounty hunter's jetpack. It ignited, sending Boba careening into the side of Jabba's sail barge and tumbling into the man-eating pit. 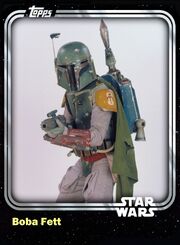 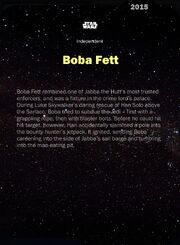 Retrieved from "https://starwarscardtrader.fandom.com/wiki/Boba_Fett_-_Bounty_Hunter_(ROTJ)_-_Base_Series_1?oldid=31636"
Community content is available under CC-BY-SA unless otherwise noted.