Also known as Rugor Nass, this Ankura Gungan is the supreme leader of his people during the infamous Trade Federation invasion of Naboo. Proud, jolly, but somewhat prejudiced towards humans. Boss Nass swallows his pride when he smartly allows Queen Amidala to make use of the Gungan Grand Army. The enemy droids are beaten back Naboo is freed from Trade Federation aggression, and Nass celebrates this great victory with an excited crowd of new human allies. 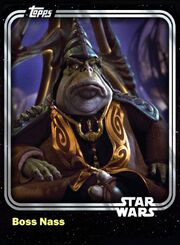 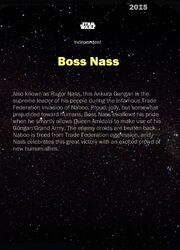 Retrieved from "https://starwarscardtrader.fandom.com/wiki/Boss_Nass_-_Gungan_Leader_-_Base_Series_1?oldid=17599"
Community content is available under CC-BY-SA unless otherwise noted.