An Ubese male from Uba IV, heavily-clad Boushh secures a reputation for himself as a formidable and dangerous bounty hunter, although he is small in stature. After his death, which is not widely known, it is Princess Leia Organa who is given Boushh's distinctive armor and helmet to utilize on missions requiring infiltration. She puts this material to excellent use, disguising herself as the feared bounty hunter to rescue carbon-frozen Han Solo from Jabba the Hutt's palace on Tatooine. 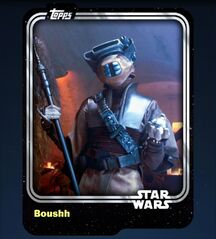 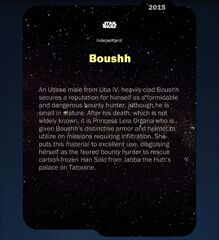 Retrieved from "https://starwarscardtrader.fandom.com/wiki/Boushh_-_Bounty_Hunter_-_Base_Series_1?oldid=35872"
Community content is available under CC-BY-SA unless otherwise noted.