C'ai Threnalli was a daredevil Abednedo pilot who flew as Poe Dameron's wingman during the evacuation of D'Qar base. Despite his own flamboyant prowess in the air, Threnalli had quite a time keeping up with Poe's super-fast starfighter. After the Resistance cruiser Raddus was crippled by an attack on its hangar, C'ai was left grounded. Doubts about the judgement of Vice Admiral Holdo began to enter his mind, which was another thing he had in common with fellow flier Dameron. 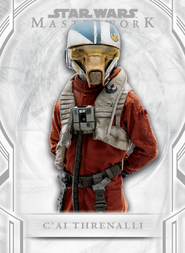 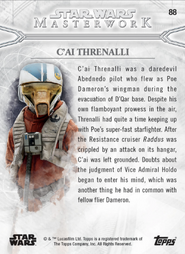 Rare, back
Retrieved from "https://starwarscardtrader.fandom.com/wiki/C%27ai_Threnalli_-_Masterwork_2018_-_Base?oldid=8517"
Community content is available under CC-BY-SA unless otherwise noted.