Poe Dameron's sometime wingman, C'ai Threnalli, was a dangerous and reckless pilot who flew missions for the Resistance. although clearly not up to par with Dameron's turbo-charged starfighter skills, Threnalli, a native Abednedo and glory-seeking flyer in his own right, somehow managed to fulfill his tactical obligations. always eager to rebel against any sort of authority, he joined forces with Dameron and several others to overthrow Vice Admiral Holdo in a coup that ultimately failed. 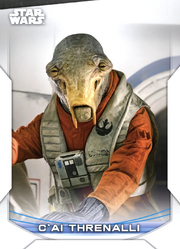 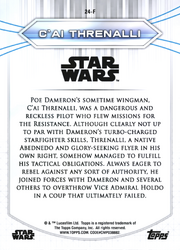