Protocol Droid C-3PO continues to serve the Rebel Alliance as they embark on their mission to rescue Han Solo from the clutches of the vile gangster Jabba the Hutt. As part of Luke's plan, C-3PO is offered as a gift to Jabba and the Droid is put into service as Jabba's translator In [sic] the fracas that ensues aboard Jabba's sail barge, C-3PO once again finds himself in harm's way, as does his astromech counterpart, R2-D2. A short time later, the golden Droid joins Leia, Solo, and Luke Skywalker on Endor's forest moon, where he fascinates the Ewok population with tales of his recent adventures. 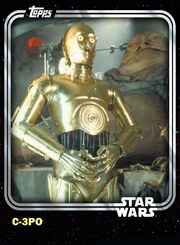 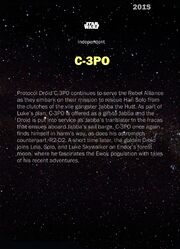 Retrieved from "https://starwarscardtrader.fandom.com/wiki/C-3PO_-_Jabba_the_Hutt%27s_Interpreter_-_Base_Series_1?oldid=35876"
Community content is available under CC-BY-SA unless otherwise noted.