A bounty hunter from the[2] planet Duro, Cad Bane is known throughout the galaxy as the deadliest and most fearsome hired gun during the time of the Clone Wars. Loyal only to his selfish interests, Bane simply works for the highest bidder, although he is frequently employed by Count Dooku and Darth Sidious for significant jobs directed against Republic interests. He also tangled with formidable Jedi warriors over the years, including Obi-Wan Kenobi, Mace Windu, and Ahsoka Tano. 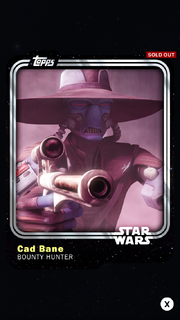 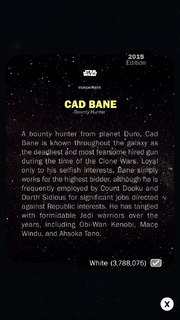 Retrieved from "https://starwarscardtrader.fandom.com/wiki/Cad_Bane_-_Bounty_Hunter_-_Base_Series_1?oldid=31499"
Community content is available under CC-BY-SA unless otherwise noted.