Captain Antilles served under Senator Bail Organa of Alderaan during the early days of the rebellion. As captain of the Tantive IV, he is part of a mission to intercept the plans for the Empire's ultimate weapon, the Death Star. After preventing their escape above Tatooine, Darth Vader's forces, [sic] storm Antilles' ship. He assures the Sith Lord that they are merely on a diplomatic mission, refusing to reveal the location of the plans. Angered by his show of defiance, Darth Vader strangles him and tosses his body aside. 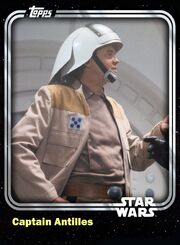 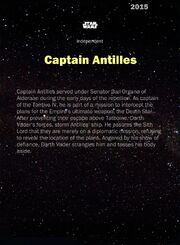 Retrieved from "https://starwarscardtrader.fandom.com/wiki/Captain_Antilles_-_Tantive_IV_Captain_-_Base_Series_1?oldid=35981"
Community content is available under CC-BY-SA unless otherwise noted.