An Imperial officer in command of the Star Destroyer Avenger, part of Darth Vader's task force prior to the Battle of Hoth. The Avenger led the search for the fleeing Millennium Falcon after the battle. When Han Solo's ship escaped, Lorth Needa decided he had to personally apologize to Vader. The apology was accepted and Needa was executed on the spot by Vader's use of dark side power. 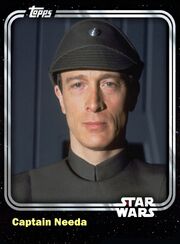 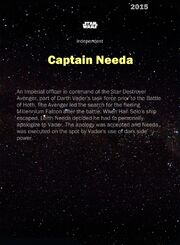 Retrieved from "https://starwarscardtrader.fandom.com/wiki/Captain_Needa_-_Imperial_Officer_-_Base_Series_1?oldid=40754"
Community content is available under CC-BY-SA unless otherwise noted.