Head of the Royal Naboo Security Forces, Panaka has issues with his diplomatic superiors, preferring military action to possible naïve overtures of peace. During the Trade Federation invasion of his homeworld, Panaka is instrumental in Queen Amidala's escape, and also aids in her bold comeback. It is Panaka who develops the elaborite security setup that makes use of the Queen's handmaidens as decoys. Although he often differs with Qui-Gon Jinn, they work together to achieve their common goal. 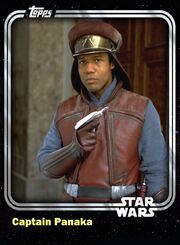 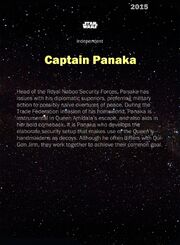 Retrieved from "https://starwarscardtrader.fandom.com/wiki/Captain_Panaka_-_Naboo_Security_-_Base_Series_1?oldid=35957"
Community content is available under CC-BY-SA unless otherwise noted.