Chewbacca is a wise, sophisticated Wookiee with enormous strength and loyalty. Born on the planet Kashyyyk 200 years before the Battle of Yavin. During the Clone Wars, he joined forces with Jedi Padawan Ahsoka Tano to free themselves from a vile band of Trandoshan hunters. Toward the end of the war, he works alongside Jedi Master Yoda and the clone army against Separatist forces invading Kashyyyk. When Yoda's clones turn against him during Order 66, Chewbacca plays a crucial role in helping Yoda to find safe passage off-world. 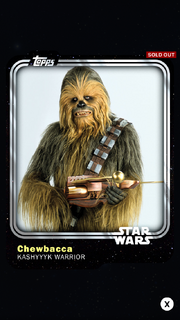 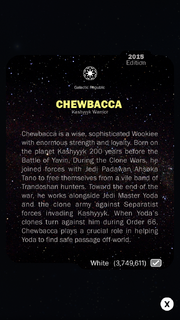 Retrieved from "https://starwarscardtrader.fandom.com/wiki/Chewbacca_-_Kashyyyk_Warrior_-_Base_Series_1?oldid=17276"
Community content is available under CC-BY-SA unless otherwise noted.