Chewbacca is a towering Wookiee and trusted friend of Captain Han Solo. When Solo is carbon-frozen and delivered to Jabba the Hutt on Tatooine, Chewbacca pretends to be the prisoner of an audacious bounty hunter, and is also delivered into Jabba's clutches. Ultimately the Rebels show their true colors and battle the Hutt's minions in a spectacular sail barge battle. Chewbacca eventually accompanies Han, Leia and the Droids R2-D2 and C-3PO to the forested moon of Endor for a decisive battle with their Imperial foes. 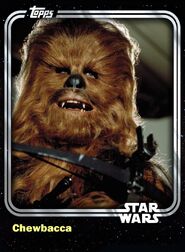 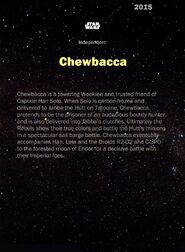 Back
Retrieved from "https://starwarscardtrader.fandom.com/wiki/Chewbacca_-_Rebel_Leader_-_Base_Series_1?oldid=9546"
Community content is available under CC-BY-SA unless otherwise noted.