Towering Chewbacca, a Wookiee from Kashyyyk, travels with space smuggler Han Solo and co-pilots the Millennium Falcon. When Solo agrees to transport Ben Kenobi and Luke Skywalker, he and Chewbacca (or "Chewie," as he's known to his friends) find themselves on a collision course with the Galactic Empire in general, and Lord Darth Vader in particular. Throughout the adventure, Chewie fights valiantly by Solo's side, eventually helping him contribute to the destruction of the Death Star battle station. 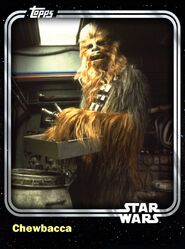 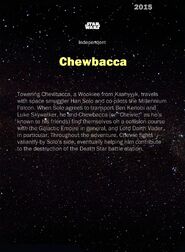 Back
Retrieved from "https://starwarscardtrader.fandom.com/wiki/Chewbacca_-_Wookiee_Co-Pilot_-_Base_Series_1?oldid=9549"
Community content is available under CC-BY-SA unless otherwise noted.