Imperial Army general Moradmin serves as personal aid to Grand Moff Tarkin aboard the newly-functional Death Star, and is also the battle station's chief manager. Dedicated and prudent, Bast analyzes the Rebel attack and discovers that a small thermal exhaust port might pose a potential danger…indeed, this weakness in Death Star's design is exactly what the Rebels are hoping to exploit. Unfortunately for Bast, and everyone on the station, Tarkin arrogantly dismisses these concerns. 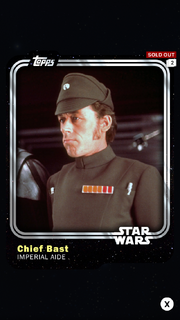 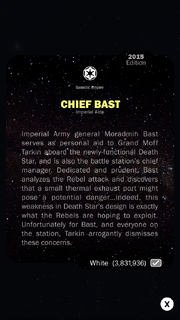 Retrieved from "https://starwarscardtrader.fandom.com/wiki/Chief_Bast_-_Imperial_Aide_-_Base_Series_1?oldid=31502"
Community content is available under CC-BY-SA unless otherwise noted.