A seasoned, fair-minded ruler, Chirpa is the head of his Ewok tribe's Council of Elders in the Bright Tree Village on the forest moon of Endor. During the historic Battle of Endor, it is a thoughtful Chirpa who must first decide the fate of the captured Rebel Strike Team (Han Solo, Luke Skywalker and Chewbacca, aided by R2-D2 and C-3PO), then deal with the feasibility of a full-scale attack against the Galactic Empire and their AT-ST Walkers. 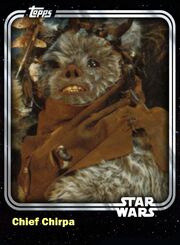 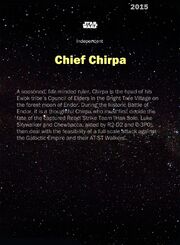 Retrieved from "https://starwarscardtrader.fandom.com/wiki/Chief_Chirpa_-_Ewok_Chief_-_Base_Series_1?oldid=31323"
Community content is available under CC-BY-SA unless otherwise noted.