Ordered by Jedi Master Sifo-Dyas to create a vast army, Clone Troopers are trained purely for combat and to serve the Galactic Republic above all else. After their discovery on Kamino by Jedi Obi-Wan Kenobi, Chancellor Palpatine uses the Clones to establish the Grand Army of the Republic. They were first deployed during the Battle of Geonosis, in order to support the Jedi Knights against Count Dooku's Separatist droids, and were present for every battle throughout the Clone Wars. 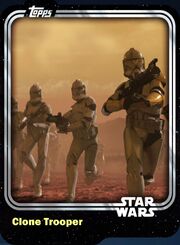 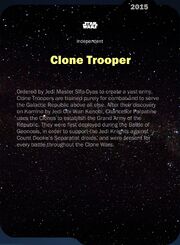 Retrieved from "https://starwarscardtrader.fandom.com/wiki/Clone_Trooper_-_Galactic_Republic_-_Base_Series_1?oldid=38982"
Community content is available under CC-BY-SA unless otherwise noted.