The leader of the 7th Sky Corps, CC-2224, nicknamed "Cody," is a loyal and extremely competent clone soldier who plays a pivotal role in the Clone Wars. Designed for a leadership position in the Grand Army of the Republic, Cody often operates under the command of the Jedi Knight Obi-Wan Kenobi, an arrangement that pleases both dedicated warriors. This all changes after Order 66, with Cody automatically turning against his Jedi ally, he orders one of his AT-TEs to fire at Kenobi and his varactyl mount, Boga. 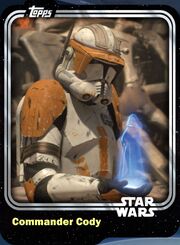 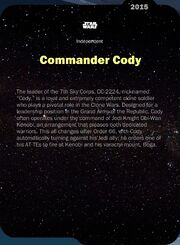 Retrieved from "https://starwarscardtrader.fandom.com/wiki/Commander_Cody_-_Clone_Leader_-_Base_Series_1?oldid=31351"
Community content is available under CC-BY-SA unless otherwise noted.