For the Queen's protection, decoys are used to divert any attempts on her life. Upon arrival in Coruscant to vote on the Military Creation Act, an explosion occurs on the landing platform and Cordé, one of Queen Amidala's handmaidens and decoy at the time, is caught in the blast and dies while apologizing to the Queen for failing her. Despite the reports of her death, Amidala appears before Senate to rebuke her enemies and oppose the creation of an Army of the Republic, hoping that Cordé had not died in vain. 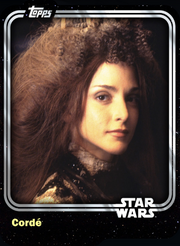 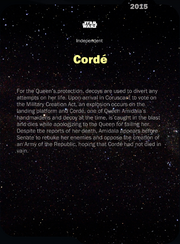 Retrieved from "https://starwarscardtrader.fandom.com/wiki/Cordé_-_Royal_Decoy_-_Base_Series_1?oldid=36005"
Community content is available under CC-BY-SA unless otherwise noted.