Count Dooku was a menacing Sith Lord and central figure in the Clone Wars. Once a Jedi trained by Yoda, he became disillusioned with the Jedi Order and thirsted for greater power. Dooku voluntarily left the light side behind and became Darth Sidious' dark side disciple, taking the secret name Darth Tyranus and leading the Separatist army. He met his end at the hands of Anakin Skywalker during a botched kidnapping attempt of Chancellor Palpatine. 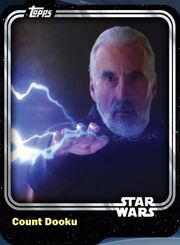 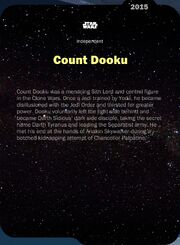 Retrieved from "https://starwarscardtrader.fandom.com/wiki/Count_Dooku_-_Separatist_Leader_-_Base_Series_1?oldid=40818"
Community content is available under CC-BY-SA unless otherwise noted.