Near the end of the Clone Wars, Count Dooku aka Darth Tyranus finds himself in an awfully precarious position. He has secretly aided his Master in creating a war that divides a galaxy. All that's left is to help rule the new burgeoning Empire…or is there? Little does Dooku know Darth Sidious has other plans; a new, younger, more powerful apprentice set to turn to the dark side. After an epic duel, young Anakin Skywalker easily bests Dooku, literally disarming him in the process. However, just as Dooku appeals to Palpatine, Anakin, wielding two Lightsabers, beheads him. 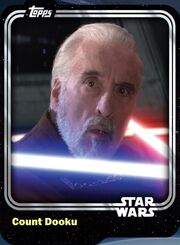 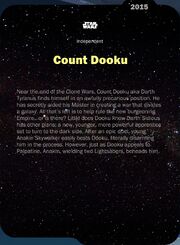 Retrieved from "https://starwarscardtrader.fandom.com/wiki/Count_Dooku_-_Sith_Apprentice_-_Base_Series_1?oldid=35896"
Community content is available under CC-BY-SA unless otherwise noted.