Dak Ralter is a starfighter pilot and gunner of Rogue Squadron in the Rebel Alliance. Born on Kalist VI, he comes to think of the galaxy as a place of hostility and conflict, with the much-hated Galactic Empire at the heart of it. Although he fights valiantly as Luke's gunner during the Battle of Hoth, Ralter is killed instantly when their speeder's aft section takes a direct hit from an AT-AT's laser barrage. His body is then crushed under one of the metal behemoth's massive footpads. 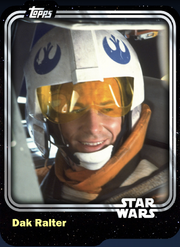 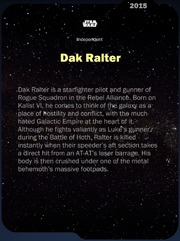 Retrieved from "https://starwarscardtrader.fandom.com/wiki/Dak_Ralter_-_Snowspeeder_Gunner_-_Base_Series_1?oldid=32245"
Community content is available under CC-BY-SA unless otherwise noted.