A Nightbrother from Dathomir and son of Mother Talzin, leader of the Nightsisters, Darth Maul was taken from his homeworld at an early age to be raised as the apprentice to the Sith Lord Darth Sidious. Darth Maul plays an instrumental role in the Invasion of Naboo, tasked with tracking down Queen Amidala. Inevitably, Maul runs afoul of of Amidala's Jedi protectors, Qui-Gon Jinn and Obi-Wan Kenobi. Although he slays Jinn in a furious Lightsaber battle during the Battle of Theed, Maul himself is sliced in half at the waist by an avenging Kenobi, a blow that would surely be the end of any normal being. 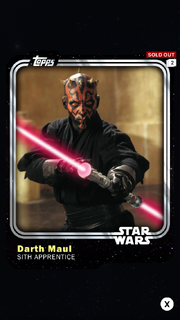 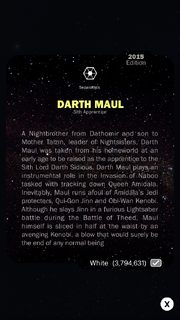 Retrieved from "https://starwarscardtrader.fandom.com/wiki/Darth_Maul_-_Sith_Apprentice_-_Base_Series_1?oldid=35933"
Community content is available under CC-BY-SA unless otherwise noted.