Concealed by a hood, Darth Sidious is overjoyed to see his intricate plan for galactic control coming together. When the Jedi discover his true identity, Master Mace Windu confronts the Sith Lord. Sidious would have perished if not for the intervention of Anakin Skywalker, an act that earned the young Jedi his name Darth Vader, Sidious's new apprentice. Vader leads the attack on the Jedi Temple while clones across the galaxy suddenly turn against their Jedi generals as part of Order 66 helping Sidious achieve his ultimate goal of becoming Emperor. With the Jedi Order destroyed, Yoda goes to fight Sidious in the Galactic Senate Chamber. 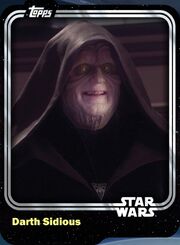 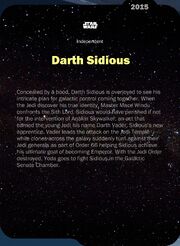 Retrieved from "https://starwarscardtrader.fandom.com/wiki/Darth_Sidious_-_Sith_Master_-_Base_Series_1?oldid=35975"
Community content is available under CC-BY-SA unless otherwise noted.