A name that was feared throughout the galaxy, the Emperor's black armor-clad enforcer and Lord of the Sith helped eradicate the Jedi after the Clone Wars. As an extension of the Empire's might, he sought out signs of rebellion and crushed them into submission. 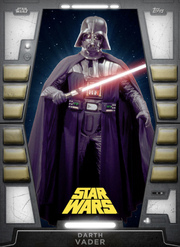 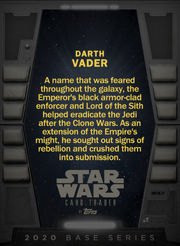 Retrieved from "https://starwarscardtrader.fandom.com/wiki/Darth_Vader_-_2020_Base_Series?oldid=34726"
Community content is available under CC-BY-SA unless otherwise noted.