More machine than man, Lord Darth Vader remains committed to the Empire's goals of galactic conquest and subjugation. He oversees the completion of the second Death Star battle station and confers with the Emperor himself on matters regarding his rebellious Jedi son, Luke Skywalker. Black-hooded Palpatine has complete faith in Vader's dedication to the dark side of the Force, while young Luke is equally convinced that he can open his father's eyes to the evil he has done. 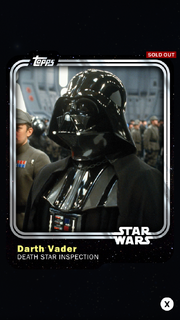 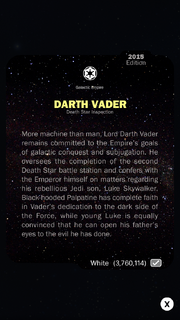 Retrieved from "https://starwarscardtrader.fandom.com/wiki/Darth_Vader_-_Death_Star_Inspection_-_Base_Series_1?oldid=36079"
Community content is available under CC-BY-SA unless otherwise noted.