After narrowly surviving the Rebel raid on the Death Star battle station, Lord Darth Vader commits himself to the capture of Luke Skywalker, in actuality his long-hidden but never forgotten son. Vader pursues and ultimately captures Leia Organa and Han Solo, using them to lure the semi-trained young Jedi to Bespin for a fateful, painful encounter. An escaping Leia retrieves injured Luke with the help of Lando Calrissian, but Vader is determined to corrupt his own flesh-and-blood, so that both might reign over the cosmos. 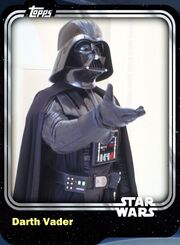 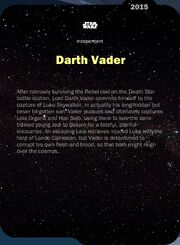 Retrieved from "https://starwarscardtrader.fandom.com/wiki/Darth_Vader_-_Search_For_Skywalker_-_Base_Series_1?oldid=40821"
Community content is available under CC-BY-SA unless otherwise noted.