During his campaign to crush the Rebellion and recover the stolen Death Star plans, Darth Vader attends a meeting aboard the fearsome battle station. When Admiral Motti boasts about the power of the Empire's ultimate weapon, Vader is quick to dismiss its destructive capabilities in comparison to the powers of the Force. After an ill-timed retort, Vader validates his point by using the Force to choke the Admiral, only releasing him at the request of Grand Moff Tarkin. 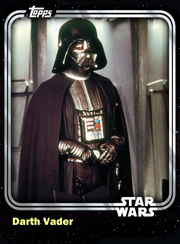 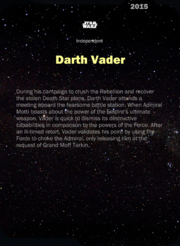 Retrieved from "https://starwarscardtrader.fandom.com/wiki/Darth_Vader_-_Sith_Lord_(ANH)_-_Base_Series_1?oldid=34567"
Community content is available under CC-BY-SA unless otherwise noted.