Equipped head to toe in black, the most prominent feature of the Imperial Gunners uniform is their large black helmets. The thin slit-like visor comes with a polarized lens to protect their eyes from the bright flares of laser fire. Their helmets are also fitted with sensors for tracking down enemy fighter craft, as well as a comlink, which enable them to coordinate, aim and fire with precision. Many gunners are recruits with the Imperial Navy's piloting program but are either still training or past their prime. Nevertheless, Imperial Gunners still possess the skills and expertise necessary to operate these powerful weapons. 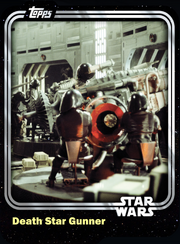 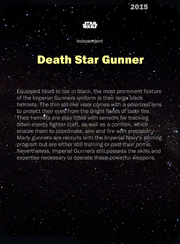 Retrieved from "https://starwarscardtrader.fandom.com/wiki/Death_Star_Gunner_-_Galactic_Empire_-_Base_Series_1?oldid=39337"
Community content is available under CC-BY-SA unless otherwise noted.