Grand Moff Tarkin himself selects the elite Imperial Navy Troopers when he sees the need for a commanding force aboard the First Death Star. These specially trained troopers are taken from the most capable of the Imperial Navy. These individuals are well trained in advanced warfare as well as independent command and are stationed throughout the Death Star in both combat and non-combat positions. The positions include guarding detention blocks to operating the battle station's superlaser. To separate them from the standard stormtroopers, they are issued all-black uniforms. 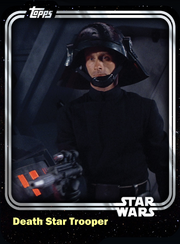 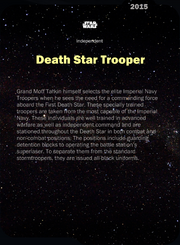 Retrieved from "https://starwarscardtrader.fandom.com/wiki/Death_Star_Trooper_-_Galactic_Empire_-_Base_Series_1?oldid=34569"
Community content is available under CC-BY-SA unless otherwise noted.