Crude and slovenly, Dengar was nonetheless an effective bounty hunter. While some hunters prided themselves on finesse and style, Dengar preferred firepower and destruction. Despite his scruffy-looking and battered exterior, Dengar thought highly of himself, enough to make blunt passes at shapely females that caught his eye. Despite these obnoxious qualities, Boba Fett enjoyed working with Dengar and held him in high regard due to his proven track record in hunting down prey. He was part of the motley band of bounty hunters assembled by Darth Vader to track down the Millennium Falcon after the Battle of Hoth… 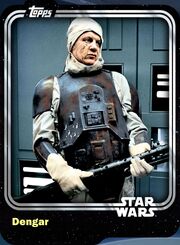 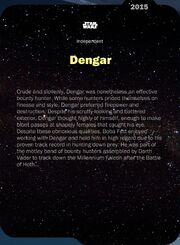 Retrieved from "https://starwarscardtrader.fandom.com/wiki/Dengar_-_Bounty_Hunter_-_Base_Series_1?oldid=40969"
Community content is available under CC-BY-SA unless otherwise noted.