Living mostly in garbage pits, sewers and trash compactors, dianoga are capable of sustaining themselves off any organic matter they come across. They are distinguishable by a single eyestalk protruding from the tops of their bodies, as well as their seven tentacles surrounding their fanged mouths. In their larval forms, they are nearly microscopic, allowing any garbage transport to unknowingly ferry them from planet to planet. One dianoga found its way onto the first Death Star and held Luke Skywalker underwater, wrapped in its tentacles. When the trash compactor walls became active, it was forced to release him. 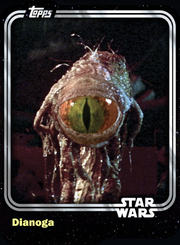 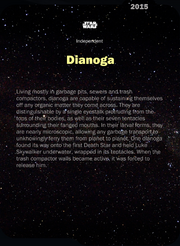 Retrieved from "https://starwarscardtrader.fandom.com/wiki/Dianoga_-_Creature_-_Base_Series_1?oldid=39341"
Community content is available under CC-BY-SA unless otherwise noted.