One of several royal handmaidens assigned to Padmé Amidala of Naboo, Dormé is a loyal, courageous lookalike ready to take the place of her former queen whenever danger threatens and a decoy is required. After Amidala is forced to flee Coruscant with Anakin Skywalker and R2-D2 following a pair of back-to-back assassination attempts. Dormé remains behind with Captain Typho, maintaining the illusion that the targeted Senator is still in the Galactic Republic capital. 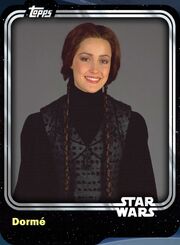 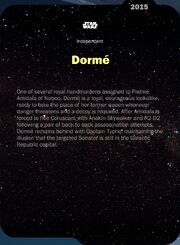 Retrieved from "https://starwarscardtrader.fandom.com/wiki/Dormé_-_Handmaiden_-_Base_Series_1?oldid=36033"
Community content is available under CC-BY-SA unless otherwise noted.