A member of the Max Rebo band, Droopy McCool's real name is Snit, and he hails from the planet Kirdo III. Snit plays a flute made from a hollow chindinkalu plant that is native to his home world. Fellow band member Sy Snootles becomes quite taken with him, and it is she who suggests that he change his name to the more palatable (for an entertainer) Droopy McCool. Both are against Max Rebo's hasty decision to establish the band as a permanent attraction in Jabba the Hutt's court. 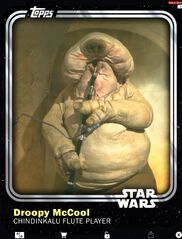 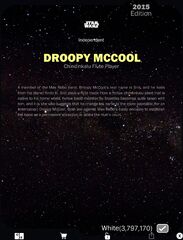 Retrieved from "https://starwarscardtrader.fandom.com/wiki/Droopy_McCool_-_Chindinkalu_Flute_Player_-_Base_Series_1?oldid=40318"
Community content is available under CC-BY-SA unless otherwise noted.